It seems a little unfair to review these guys considering the fact that the only thing I know about WWE is that it definitely doesn’t have anything to do with pandas (thank goodness that confusion was cleared up!) and Hulk Hogan doesn’t wrestle any more. At least I assume he doesn’t, since he must be way past retirement age by now. 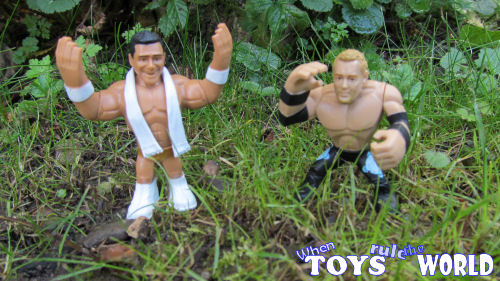 The figures come in a 2-pack, are a couple of inches tall, with articulation at the arms and waist. Poseability is therefore limited, but more than enough since these figures will likely just be smacked together by children. Their small size means that a child could carry around a whole bunch of these in their pocket. They have a good likeness to their real-life counterparts.

One comes with a scarf. I assume this is important to his character.

We found playing with these two figures is a little limited (hence the lack of exciting video), but then our family is definitely not the target for these. I’m sure most WWE fans, however, will end up with a whole bunch of their favourite wrestlers (and possibly a wrestling ring) which would liven up things no end. As it is, I find them little more than two guys in their pants and my boys had zero interest in them.