Donald Trump has a knack for choosing weak adversaries. He recognized the potential in taking advantage of undocumented workers. He used the element of surprise to take out Vince McMahon. Then he cut through a field of supposedly formidable Republicans as though they were Lilliputians, setting himself up for a general-election match-up against Hillary Clinton—who, it turned out, was a notably weak Democratic nominee.

Now it’s the press’s turn. While he’s bashed the news media since early in his campaign, the president has recently elevated his feud, with attacks on Mika Brzezinski and CNN that shocked even benumbed observers. Reporters are, understandably, horrified, but the general reaction from the press seems likely to encourage Trump while failing to rally the public against his behavior. 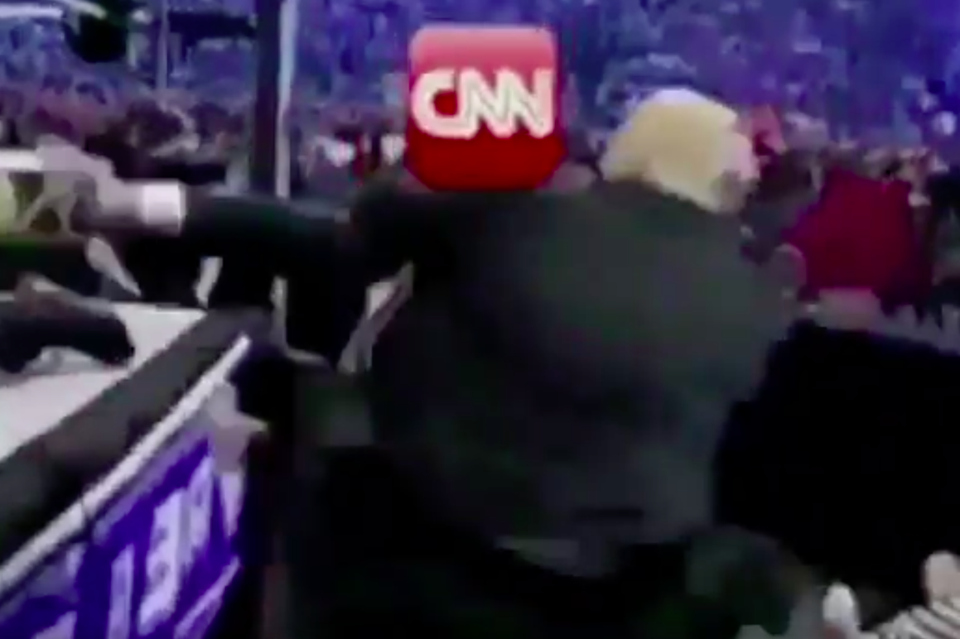 Trump’s attack on Brzezinski, including bizarre (and seemingly invented) claims about a botched facelift, is fully in keeping with the behavior of a man who boasted about committing sexual assault. His decision to post a video in which he attacks a man with the CNN logo superimposed over his face—an alteration of an old appearance with McMahon at a WWE event—can only be read as encouraging violence against the media; the best that can be said for it is that it might be, like professional wrestling, insincere, though what it would mean for someone to commit insincere physical violence against the press is anybody’s guess.

For reporters, it feels demoralizing to be attacked repeatedly by the president of the United States; some feel physically threatened. But the best way to respond to this is to make a stronger case to the American people as to why Trump’s attacks are unacceptable, rather than expecting it to be self-evident, or hoping that pity and sympathy will elicit public support. Rather than explaining why the president attacking the media is bad for the media, the media need to appeal to the public’s self-interest and explain why it’s bad for them.

Most Americans disapprove of the president—but most of them disapprove of the press as well. Just a third of Americans trust the media. Two-thirds believe the media are politically biased. Forty-five percent say the media “abuse” their First Amendment rights, versus just 35 who say they use those rights responsibly. Other presidents have faced implacably hostile press corps, but none of them have had the benefit of so unpopular a press. Trump is trying to press that advantage, and simply appealing to the public to take the side of the press on grounds of reasonability is unlikely to find much traction.

Besides, Trump has been assailing reporters for months: There were his repeated attempts at bullying NBC’s Katy Tur; his attack on Megyn Kelly, then of Fox News, for having “blood coming out of her wherever”; and more general bashing that was a staple of campaign rallies. This had little impact on his ability to win almost half of the votes in the November election. Even when Republican candidate for Congress Greg Gianforte physically assaulted Guardian reporter Ben Jacobs in May (don’t take my word for it: Gianforte pleaded guilty), he was easily elected. And reactions to Gianforte’s assault, instead of reflecting moral principles, quickly split along partisan lines, with Democrats outraged and many Republicans rationalizing the assault.

The press, and the nation, can ill-afford for condemning physical attacks on reporters to become a partisan issue, and yet so many responses to Trump have fallen into the trap of encouraging precisely such partisan reactions. Take the statement that CNN’s public-relations team put out over the weekend. “It is a sad day when the President of the United States encourages violence against reporters,” it began. Fair enough. Next: “Clearly, Sarah Huckabee Sanders lied when she said the President had never done so.” This is a little dodgier. Some precincts of the press are more nervous about calling White House officials liars than others, but it’s hard to see what purpose dragging in a silly claim by a deputy spokeswoman serves here. And then the coup de grace:

Instead of preparing for his overseas trip, his first meeting with Vladimir Putin, ‎dealing with North Korea and working on his health care bill, he is involved in juvenile behavior far below the dignity of his office. We will keep doing our jobs. He should start doing his.

Of course the video is juvenile; of course the president should be spending more time staffing his administration, learning what’s in the Senate health-care bill, and boning up on policy. But what purpose does this snark serve? It only encourages the view of Trump—and many of his supporters—that the media are out to get him and view him as the enemy.

The press tends to fare best when it doesn’t make itself the story, but that’s particularly imperative here. As Ishaan Tharoor writes, Turkey under Recep Tayyip Erdogan offers a cautionary tale of what happens when a free press fails to defend itself effectively against an authoritarian leader. But it isn’t sufficient just to declare that the press is under attack. It’s not even enough to declare that the First Amendment is under attack, since even that has lost public support. In a Newseum poll, 74 percent of respondents did not think that “fake news” should be protected by freedom of the press—a grave misunderstanding of how a free press operates. Four in 10 Millennials support censorship of offensive speech.

Nor is the answer, as Ari Fleischer would have it, for the press to ease up on Trump. Like all spokespeople, Fleischer, a former White House press secretary, wants to convince reporters that they just need to pull their punches, when soft-pedaling will really only erode the press’s standing, and its ability to do its job.

In order to defend itself, the media will have to make the case that Trump’s attacks on the press are bad for the public. The problem with the president’s behavior isn’t that he’s mean to the press, since anyone who signed up for a journalism job in order to be chummy with elected officials chose the wrong career. The problem is that his attacks on the press threaten to undermine public confidence in its work, and its ability to gather and convey information on an independent basis. In a democracy, the press is the means by which ordinary citizens gain the information necessary to make informed decisions and to judge their elected representatives. The president has repeatedly and flagrantly attempted to mislead the American public; those deceptions are well-chronicled, because there is a free press to document them. There’s no way to temper free speech for the media without tempering free speech for the rest of the population.

It’s no use trying to make the public love the members of the press, much less pity them. What matters is convincing the public that the press is worth tolerating, because it’s an essential guarantor of the public’s own freedoms. The irony is that no one understands the utility of a freewheeling press quite like Donald Trump. Even as he railed against reporters at campaign rallies, the candidate knew full well that his ability to play to the papers and television had inflated his mediocre business career into a world-famous one, and his long-shot candidacy into a presidential victory. His attacks were doubly distasteful because they were were disingenuous. At some point, though, that changed. Trump’s view of the press shifted into outright fury—witness the stories of the president yelling at televisions reporting unflattering news about Russia and the firing of FBI Director James Comey.

Even now, when it suits his purposes, he recognizes the importance of the serious, mainstream press. When the House pulled the first version of its Obamacare replacement, Trump broke the news in phone calls to The Washington Post and New York Times. When the Comey story exploded, Trump chose to grant an interview to NBC News’s Lester Holt. The reason the administration has all but ended on-camera briefings at the White House is that its spokespeople can’t answer simple questions from the press without coming across as either ridiculous or dishonest; it’s easier simply to prevent the public from seeing that. Rather than acceding to Trump’s attempt to enlist them as his primary enemy, the media might enlist him as the unwitting pitchman for the indispensable role they play.

Why the Media’s Defense Against Trump Has Proven So Ineffective