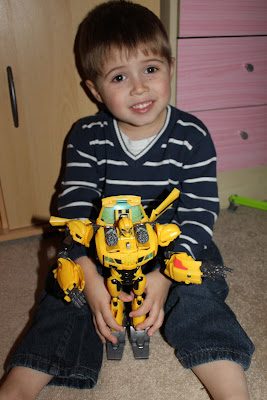 Out of our Toyologist box we were please to see the transformer weaponizer we were sent was Bumblebee the autobot, you have to love the good guys don’t you!.
Every time I see a transformer I am dragged back to my childhood, my brother was a big fan then & my children are big fans now, I can’t help singing “transformers, robots in disguise” when ever I see one. Bumblebee is suitable for ages 5+, little T is 4 so maybe a bit young for it but he still enjoyed playing with it. He is unable to transform it from robot to car so that is left for mummy to do, although I grew up around transformers(they have been around forever it seems) I am no pro when it comes to making robots turn into cars and visa versa. I watched my brother play but I was not allowed to touch his precious transformers so when it came to transforming Bumblebee I did need the instructions. Thankfully they are easy to follow & give you a step by step guide, a good while later I transformed Bumblebee into a car. 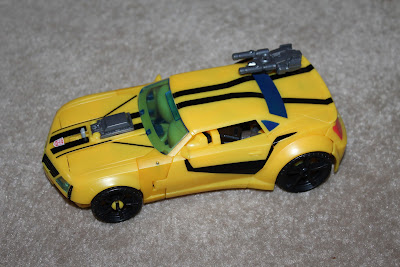 It still amazes me that they can go from Robot to car with just a few twists & pushes. Bumblebee’s Blaster gun can be positioned in his hand as a robot or on the boot as a car, he also has secret weapons, with the flick of a switch the revolving guns pop up from the bonnet in car mode or either side of his head in robot mode ready to launch fire on the decepticons.

The Transformers Prime Weaponizer’s can be bought for just £34.99 from Toys R Us, I do think this is a fair price because all parts have stayed intact even after rough play, I would recommend Bumblebee to family & friends & no doubt Optimus Prime will find his way onto the boys Christmas list this year. 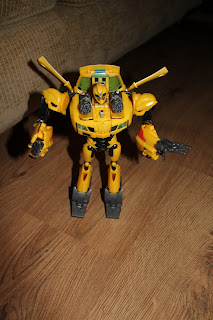 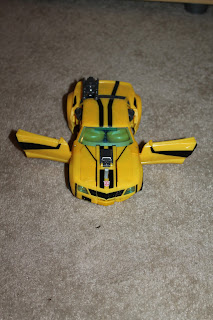