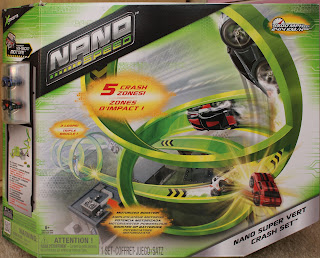 In our second toyologist box we had Nano Speed Super Vert crash set by the makers Spin Master. In the set you get the track, instructions, 2 x Nano cars & stickers. Setting up the track was really easy & each piece of track had numbers on so it was easy to identify the pieces which I though was brilliant for people who are not great at setting up these kind of tracks (mainly women who spent their childhood playing with dolls). Setting it up took about 5 minutes that is how easy it was. The motorised booster 2 x D batteries, the motorised booster helps to send the cars flying around the track. In the instructions there is no mention of where to put the stickers & the box images do not correspond with the sticker given so we ended up leaving the Nano speed stickerless. 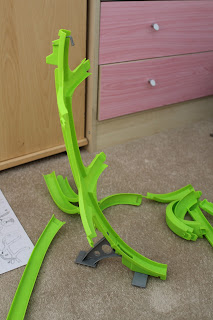 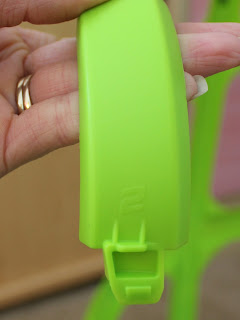 The track has 3 loops, an inverted corkscrew & 5 crash zones. The cars launch by you pulling them back until they click, this then powers them until they reach the motorised booster. This is where we hit our first problem, it was hit & miss if the car would launch, they would either flip upside down, release the wheels if the pressure was taken off the small cars or you would get lucky & they would launch. 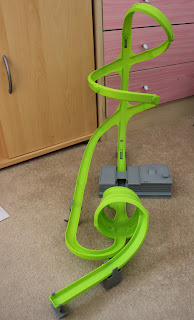 If launched then the Nano cars would shoot through the loops & then given extra speed through the motorised booster. This is when we hit our second problem!, instead of speeding through the inverted corkscrew & back down to the 3 loops they would fly off the track, sometimes in your direction. I was not successful at keeping the 2 cars on the track at the same time sadly so I never got to test how well they crash. The motorised booster sounds like a mini jet plane when it is switched on & although this will not bother the child it can get a bit annoying for us parents. Little T had a play when he came in from school & thought it was brilliant, but he is only 4 & he didn’t expect to be able to get the 2 cars crashing. He took it for what he saw, a car track to play cars with, he also struggled to launch the cars too so it wasn’t me just being a silly heavy handed adult.

If the cars stayed on the track to be able to get 2 cars on it to crash then it would have been brilliant as it is the easiest track to set up, the connections work perfectly & stay intact, it was just keeping the cars on the track & launching them that we struggled with. Nano Speed retails at £34.99 which it too much for this due to the difficulties launching & staying on the track.
[youtube http://www.youtube.com/watch?v=i9TVp6VI7tw]
The Nano Speed Super Vert crash set is available to buy from Toys R Us for £34.99.