The entire family enjoys playing Board Games, so we were all very interested to see how easy this would be to include everyone.We have had a few games that are just impossible to play with the younger children, which then leads to boredom and the entire game being disrupted.

This game is extremely easy to set up and looks very intriguing when you first open it. There are three parts to the game Guessing, Drawing and Describing, which certainly gave everyone a fair shot at winning as I am absolutely hopeless at drawing and some of the childrens describing things is hilarious!

With this in mind we all felt quite confident that any one of us could in fact win the game, and the extra special thing about this game is that there are two winners, the person that actually gets to the end square and the person that guesses their action correctly, meaning that even the person at the back (usually mum) could just as easily be crowned joint winner of the game.

This is a fabulous idea and means that none of the children get disheartened if they fail to answer or guess some of the tasks. 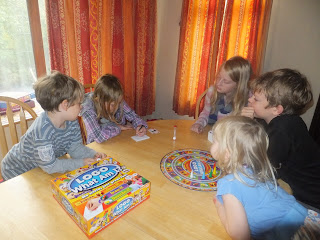 The children were also able to play the game by themselves, Neva is currently on a Drawing space and they are all trying to guess!!

They all really enjoyed playing the game and none of them got bored, the timer is only 60 seconds which means the game moves on quite quickly and everyone feels included.

Because all of the Logos are current, the younger ones also recognised some, which they got very excited about!

The post Logo What Am I Review appeared first on Toys R Us Blog.