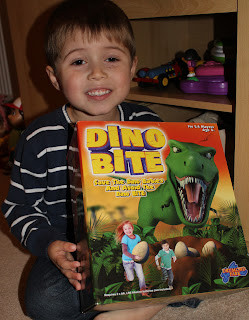 I received Dino Bite in our Toyologist box & I thought, great! the boys will love this. I set up the game & we all gathered round ready to play, I switched it on & the Dinosaur started to make a sound. Little T jumped up & announced “I am not playing that, that dinosaur bites!” he refused to play & instead decided to watch us play. So myself, nanna, M age 8 & big T age 10 went ahead with the game. We took it in turns to throw the coloured die & then with the Dino tweezers pluck the colour of Dino baby egg from the nest. The aim of the game is to save all of the Dino babies from the rampaging T-Rex without waking him, because if you are the player that wakes him you are out of the game. 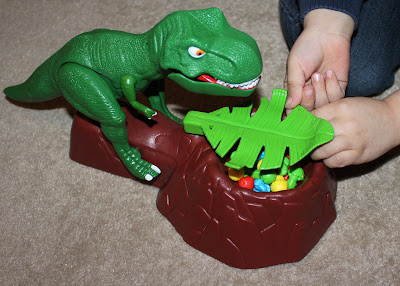 The leaf covering the nest only lift a little so it can be difficult to grab hold of the baby with the tweezer so if the player finds it difficult they are permitted to use their hand instead. When T-Rex catches you he lunges forward to bite, which when it 1st happened I jumped out of my skin, you literally have no clue when it will happen so it does make you jump a little or in my case a lot!. 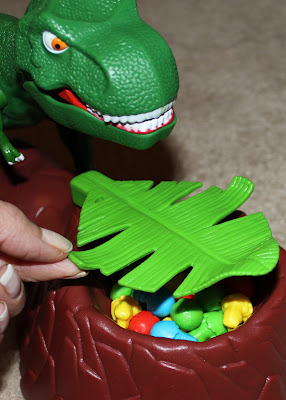 The children of course thought this was hilarious so it only added to the fun of the game. I have tried on a few occasions to get little T to play, but sadly I have failed, he will only put his fingers in if he knows it is switched off. I am not sure why he is scared of it because he happily hand feeds our chickens without any problems. All of the other children happily played it & they both said it was a fun game so I am sure most 4 year olds would love it. The winner of the last remaining player. So the less you disturb T-Rex the more chance you have of winning. You could play with rules that the player who collects the most Dino babies wins to make it fairer on smaller children who have not yet mastered the art of being gentle.
Overall it is a fun game that the whole family can enjoy, it is suitable for ages 4+ & is suitable for 2-4 players. Dino Bite can be bought from Toys R Us for just £14.99 which is a great price for this game. 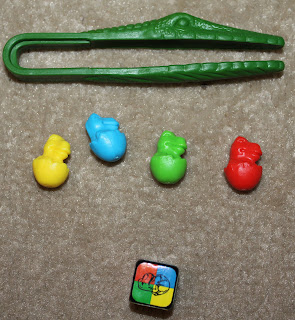