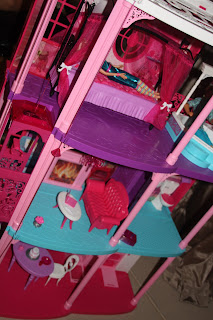 One of the toys that I received to review in our second ToysRUs Toyologist box was a 3 Storey Dream House. I always wanted on of these when I was a child so I was very excited to receive this!
The Barbie Dream House is a luxury home with “glamorous photo-real wallpaper”. On the ground floor there is a dining area, complete with light-up chandelier and a fully stocked kitchen (dishwasher, oven, hob, fridge freezer…). The first floor has a living room – the flat screen TV comes out of the fireplace – and a bathroom with shower, toilet and sink. On the top floor there is a bedroom and an outdoor balcony with a hot tub and tiki lights. You get lots of various bits and pieces like plates, cutlery, foot spa, bed coverings, laptop etc to aid play.
Various sound effects can be heard in the house including a doorbell, kitchen timer, fireplace, shower water and flushing toilet – for this you need batteries and lots of them. The Barbie Dream House takes AA batteries and for your own sanity, put these in before assembling.
When we got it out of the box we were faced with this; 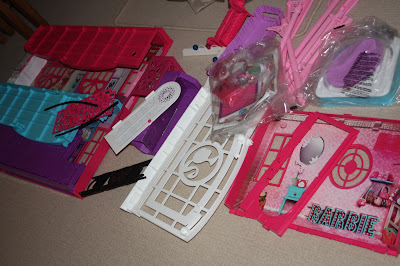 It was all a bit Krypton Factor and outside my capabilities so I called for reinforcements – Mr M, but even he struggled with the instructions. You get a large piece of paper with picture instructions (I guess because this product goes to a lot of countries, it makes it easier) but they are black and white and near impossible to see the detail. Also, one of the pink supports was broken. Fortunately, Mr M is handy with a hot glue gun and fixed it but this could have been quite disappointing if it had to be returned. One word of warning – once this is erected, it ain’t ever coming down. Never. I’m not sure you’d be able to dismantle the Dream House without breaking it so I’m certainly not going to try that now. That’s probably a big downside for us to be honest but we’ll see how it goes.  Don’t underestimate how big this house is, it’s huge. I think the measurement was 110cm and it’s certainly taller than my son!
I’ll be honest and say the plastic wasn’t of the greatest quality, some bits felt a bit flimsy, especially whilst constructing the house. I was a little bit worried that the pressure required to put the supports in would snap them. I don’t think many of the parts would withstand a lot of abuse but it’s sturdy enough for what it is intended.  It’s also very bright – lots of over-the-top pink and purple which my daughter loves but may well not be your thing.
Once it’s up though? It’s pretty impressive. (Mr M remains unimpressed and doesn’t get what the fuss is about). It’s a thing of dreams and I know my little lady will spend hours playing with dolls – she already likes all the kitchen bits and bobs – Toy Story Barbie spends her day putting the dishes in the dishwasher, food in the fridge and setting the table, well Toy Story Ken generally lounges in the hot tub.

It might have been nice if there had been a few more accessories for it and the rugs were actually made of cardboard which was a bit disappointing. I think for the price, it would have been great if these had been made of fabric. I’ll probably end up replacing these myself.

There’s no getting away from the fact that this is a mightily expensive toy and perhaps quite far out of some people’s budgets. Whilst I love the Dream House, I’m not entirely sure that you are getting value for money but it’s great fun and can provide hours of endless play. It’s certainly bring a new dimension to my daughters play and revitalised her love for her Barbies.  For any Barbie fan, a Dream House has to be at the top of the list and I know that this will be the star attraction when her friends come round!
Would I buy it myself? I’m not sure. It would be certainly up there on the wish list but the price would be a bit off-putting for me as it’s a lot to spend on one toy. I can’t deny though that little girls love it and it’s something that will get played with lots.
Finally –  a very important warning! If you are thinking about buying this for Christmas or a birthday, this product comes in a huge, heavy box with a big colour picture of the Dream House on the side. It could quite easily spoil a surprise present so I’d either pick this up in store or make sure the children aren’t around when it’s delivered!
The Barbie 3 Storey Dream House retails at around £200 and will be available from Toys R Us shortly.


Review by Mrs M from At Home With Mrs M